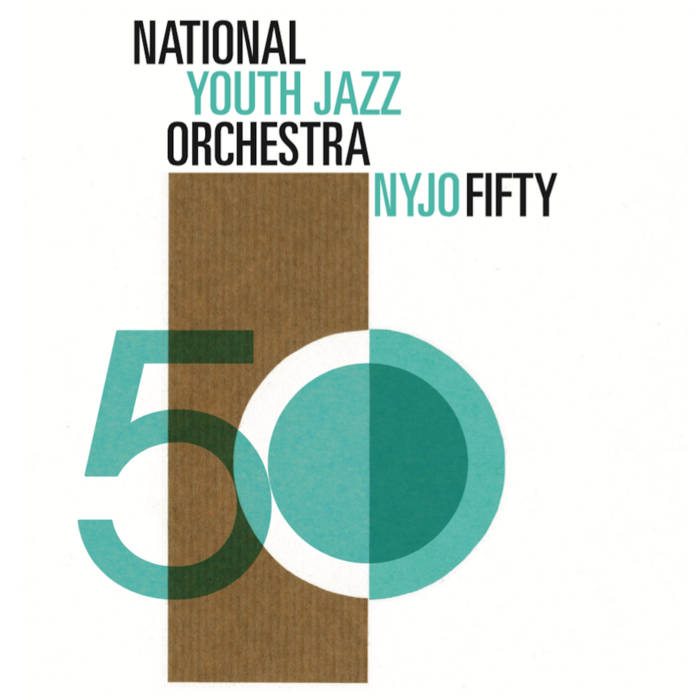 NYJO FIFTY celebrates the 50th anniversary of a British institution, The National Youth Jazz Orchestra, who have recorded well over 40 albums to date with this their first release for Whirlwind. Recorded at Air Studios in London, the album reflects the wide range in repertoire, style and musical colors for which NYJO has become known, with a look at new repertoire and some of the band’s past favorites to celebrate 50 years as the UK’s premier youth big band. A double-disc album, the band’s contemporary material makes up Disc 1 with more traditional material on Disc 2. It has always been NYJO’s belief that in order to create a firm foundation for progression in the music, a clear sense of the legacy of jazz and in particular the great lexicon that makes up the big band style is needed. FIFTY accomplishes this and more with a program of varied arrangements reflecting trends in both historical and contemporary large ensemble jazz bands.

The album features special guest soloists in Mark Nightingale (trombone) and Gareth Lockrane (flute), arguably two of the best-known NYJO alumni who have contributed a great deal to the ensemble over the years as members and, in Mark’s case, also as a writer. Mark’s 'He’s Just My Bill' has been a stalwart, and as yet unrecorded, selection in NYJO’s live concerts for many years. Gareth is featured on the Yellowjackets’ number 'Rush Hour'. The album also features saxophonist Julian Siegel and his 'Mama Badgers' (originally written for The Voice of The North Jazz Orchestra) while guest pianist Zoe Rahman’s 'Red Squirrel' gets a reworking from its original piano-trio version into a full-scale big band arrangement by NYJO Artistic & Music Director Mark Armstrong.

Since 2010 NYJO has commissioned new music from leading UK jazz composers. Some of this was featured on their 2012 release The Change and this time includes 'Wintermute' by Kit Downes, 'No Man Is An Island' by Laura Jurd and 'Sub Hub Hubbub' by Jason Yarde. As usual, there is music written and arranged by current or recent band members - Laura Jurd has a foot in both camps as an alumna too; additionally Callum Au, Chris Whiter, Nick Dewhurst, Tom Walsh and Owen Dawson are spotlighted as current writers and arrangers for the band. The album also remembers the great Stan Tracey in ex-NYJO pianist Steve Melling’s arrangement of 'Ballad for Loos', taken from Stan’s final release The Flying Pig.

There is a substantial legacy of compositions that have been generated by the band over the 50 years of its existence and two "instrumental battles” are chosen in the spirit of the traditional big band sound to do this: Matt Wates’s 'Never The Twain' pits the alto saxophones against each other and Chris Smith’s 'Going Dutch' takes us into the heavyweight category with the tenors. Additionally Josh Daniel’s groove-inspired take on 'A Foggy Day' gives Sam Glaser further space to stretch. 'St Louis Blues' is a reduction of a double-big-band arrangement written for NYJO’s collaboration with the German BuJazzO in autumn 2014. NYJO’s vocalist Jessica Radcliffe is featured on 'No Man Is An Island' in a setting of the John Donne poem. She also sings arrangements by Mark Armstrong and Callum Au, and an original song by founder Bill Ashton OBE, newly arranged by Paul Hart — one of many written by Bill for the band over the years. This recording is a reflection of what NYJO has done, what it will continue to do, and where it may go in the future.

The National Youth Jazz Orchestra is Britain’s longest-running ensemble for young people under 25 playing big-band jazz. Founded by Bill Ashton OBE in 1965, the orchestra offered aspiring young musicians the opportunity to rehearse, write and gain experience in live performance at a time when UK jazz education was in its infancy. Since then the orchestra and the junior bands of the NYJO Academy have met to rehearse almost every Saturday morning to deliver a creatively challenging experience within an informal environment. NYJO features 23 musicians and vocalists from around the country, most of whom go on to become professional musicians. Alumni include Guy Barker, Mark Nightingale, Gerard Presencer, Pete Long, Dennis and Winston Rollins and Amy Winehouse.

"It takes only two tracks of this celebratory double album to establish the breadth, maturity and technical excellence of this long-established proving ground of UK jazz talent."
★★★★ Financial Times

"This youthful orchestra can pack a punch as devastating as any big band anywhere... A splendid affair with excellent performances all round."
★★★★ Jazz Journal

"Playing throughout, both ensemble and solo, is of a consistently high standard and the whole package is highly recommended."
The Northern Echo

"A milestone... ​These are todays players, equally good at both genres (contemporary and swing) and raring to go."
★★★★ Jazzwise Magazine

​"​A fine big band album in its own right and a fitting way to commemorate their 50th anniversary NYJO FIFTY offers two CDs of real quality​."
Telegraph (Best Jazz Albums of 2015​)

"A class act that many would never guess was a student band... Immaculately played and full of gems."
The Guardian

"There's certainly no shortage of precocious talent among the soloists and ensemble."
The Sunday Times

"NYJO, as it is more commonly known, is 50 years old, and is in exceptionally good health, as this double CD, recorded in the studio, shows."
The Jazz Breakfast

"A fine celebration of an institution that has done so much for jazz education in this country."
The Jazz Mann

Bandcamp Daily  your guide to the world of Bandcamp